Fear Effect Inferno is a cancelled video game, meant to be the third installment in the Fear Effect series.

Inferno was originally announced as a PlayStation 2 sequel in 2001 and was meant to release in 2003. It was being developed by Kronos Digital Entertainment, but the company went under before they were able to finish it.

Inferno was cancelled in 2003. It is not entirely certain why Inferno was cancelled; IGN claimed the game "was the first of EIDOS’ victims to its more stringent quality assurance program", suggesting EIDOS did not feel the game's quality was high enough. Other speculation is that the progress of Inferno was too slow. Kronos also apparently had difficulty trying to find another publisher.

The cancellation of Inferno was highly lamented by fans of the series. Hana's voice actress Wendee Lee also lamented the cancellation, calling it the "game that got away". As revealed by footage, a large chunk of Inferno was already complete, including dozens of its environmental backgrounds, voice acting, cutscenes, character design, etc.

Some fans have proposed that after the remake Fear Effect Reinvented is released, instead of discarding the assets and engine, the developers should invite John Zuur Platten and Stan Liu and continue the vision of Inferno, giving Hana and the Fear Effect series the send-off they were envisioned to have. John Zuur Platten collaborated for Fear Effect Sedna as well with Square Enix Collective licensing the project, making a revival of Inferno a possibility.

A few years proceeding the events of the first game, Hana finally earns enough cash to purchase her contract back from the Triads. However, the Triad boss, Minkz, refuses her offer, threatening to murder Rain if she follows through on any notions of insurrection. Unable to remain attached to the dastardly gang, and too in love with Rain to betray her, Hana feels that her only means of escape is to take out Minkz. With her earnings, Hana employs her colleagues, Rain, Royce Glas and Jakob "Deke" Decourt. Together, they work within the Triad complex to help Hana in her stealthy effort to eliminate the crime boss with one final shot – an action that will determine her destiny.

Note: This is a plot summary analysis created by the hard work of fans compiling through various sources. The accuracy and chronology of events may be off.

Inferno would be similar to the first two games, involving fighting against monsters and demons. However, it would have ramped up the surreal elements like the Hell level from the first game.

It is hinted in this game that Hana, Glas and Rain are in some sort of love triangle, with Hana unsure if she would get with Glas or Rain. She is seen acting flirty with both of them.

The game would begin with Hana and Glas parachuting off a helicopter on a mission together to kill Minkz. They would be working with Rain who is on tech duty. Meanwhile, Rain would be in audio contact with Deke, who is working on a separate mission apparently being disguised as a kitchen chef. However, Minkz arrives earlier than expected, returning to his mansion in a helicopter; it is hinted Jin is responsible for warning Minkz about his planned assassination attempt.

Rain dons a cheongsam and joins the infiltration, likely trying to seduce Minkz as one of his girls in order to distract Minkz and buy time for Hana and Glas. She enters a dog kennel and takes out a guard. Hana tries to take out Minkz with a sniper rifle at one point; Glas tries to warn her to not shoot because he's almost there, but she takes the chance. It does not work somehow and Hana's cover is blown.

The mission goes horribly wrong when Hana gets detained, apparently in a fight with some large cyborg man. Rain gets detained as well; Minkz ominously tells her that she can join him and Hana for a private party. In another room, Rain watches as Minkz shoots Hana with a handgun to her back while she is strapped in a chair, presumably killing her. Glas is seen carrying Hana's body, suggesting Minkz' group may have been killed or caused to flee somehow (an image shows Glas in a fight with the cyborg). Deke is also seen getting a large spike through his eye/head, presumably killing him.

Glas and Rain apparently escape somehow and back at Rain's apartment, Glas visits. Rain mentions how she misses Hana, expecting her to come through the door as usual. Rain is also angry at Hana for her choice to go after Minkz, knowing how dangerous they were. They drink wine and get intimate, with Rain being consoled about Hana's demise. In grief, Rain would also punch a mirror in anger.

Meanwhile, Hana wakes up in an insane asylum wearing a straitjacket. The game apparently leaves it ambiguous if Hana is dead, or if she somehow survived Minkz' attack on her. She seems to be able to remove it and apparently fights bull-man hybrids; she gets injured in the torso and wakes up in a hospital to a nurse injecting her, suggesting the entire previous segment was a nightmare. On her hospital bed, she sees weird writing on her forearm disappear, then opens a window to find snowy mountains outside.

In the hospital, she soon experiences horrible hallucinations and ambushes. After apparently following Wee Ming into an elevator (who may have guided her around the creepy hospital), Hana experiences a vision where she sees the open elevator descend past fleshy people in an organic mass, one of them being Rain.

During some sort of idyllic boat ride with Wee Ming, Wee Ming suddenly materializes besides Hana. She passes Hana a bowl containing water. Wee Ming says, "Soon, fate shall reward their sheer effort with deliverance and grant them their deepest desire!" However, as Hana looks in the bowl, it transforms into boiling black liquid. Shocked, Hana drops it and their ride is set on fire. The ride appears to be taking Hana back to Hell.

In Hell, Hana seems to walk into a room full of breast-looking things on the ceiling; they spray blood on her. While fighting a monstrous enemy, it rips off Hana's arm and adds it to itself, though it is unclear if this always happens or if it is a game over.

Meanwhile, Glas and Rain seem to head to the old Chinese province Shanxi; an image shows him and Rain in a car. It appears that the ancient area seems to have some portal to Hell as well, likely allowing them to reunite with Hana and possibly others such as Deke.

It is also suggested Jin never died at the end of the first game, and the King of Hell may have a special role for Hana.

According to a preview, the game's plot would be less linear and have different outcomes. The game would also feature four entirely different endings. Since the game seem to revolve around Hana being dead, there may have been endings where she remains dead or dies, and other where she may be revived.

There would also another route in which players are thrown into the role of a generic Triad guard, and get to fight Deke.

Inferno would have had the ability to string combos while fighting enemies. The combos would actually change throughout the game depending on what outfit the player character is wearing. Players would also be able to launch enemies into the air and either shoot at them or follow-up with a melee move.

The player would now have two separate meters, one for health and one for fear. Environments would have hot spots, allowing players to attack enemies using specific objects in the world. 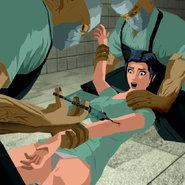 Hana being injected against her will

Hana apparently killed by Minkz with a handgun to her back

Hana bleeds from the front

Rain in a new outfit

Glas shooting at something

Hana in a straitjacket

Hana in a straitjacket

Hana being injected by a nurse

Hana in a hospital bed

Wee Ming in the elevator

Hana during the elevator hallucination

Hana in a bloody gown

Hana on some sort of tranquil boat ride

Wee Ming only stares as the ride burns