"You're gonna wear THAT? Why don't you just walk in there NAKED?"

Rain Qin is a character in Fear Effect 2: Retro Helix and Fear Effect Sedna. She was also meant to appear in the cancelled Fear Effect Inferno. Rain is the daughter of Rachel Kazra and Qin Zheng, and the sister of Mist. Rain is half-Chinese and half-Caucasian, though she resembles her mother more.

She is Hana Tsu-Vachel's partner in select missions that require someone with advanced technical knowledge. Having no memory of her past, she is a rather mysterious individual. By the time of Sedna, Rain has become Hana's girlfriend.

Due to most of her life being lived in the spiritual life of Penglai Shan, Rain developed a very peaceful but also naive and sheltered personality. She has inherent intelligence which helps her to do things like hacking.

Rain has a strong bond with Hana and will do whatever it takes to protect her. She lacks Hana's training and is a bit clumsier, but she is still a valuable ally to Hana. She fears for Hana's safety a lot and worries about Hana being injured or dying.

Rain becomes entrenched in Hana's violent lifestyle, doing missions for the Triad in hopes that Hana can obtain the funds to buy her Triad contract and free Hana from the organization. Rain also has more reservations about killing people than Hana is, one time hesitating and saying she couldn't do it before Hana ordered her to do it.

An archaeologist and geneticist named Rachel Kazra learned of Qin Zheng's immortality experiments. She took over the excavation, found his living body, and injected herself with a sample of Qin's genetic essence. The union of their genes gave her divine power and she gave birth to twins, Mist and Rain, in another "world" called Penglai Shan.

Rain embraced her human side and fled Penglai Shan. She escaped into the mortal world, but the journey across the Weak Water washed away her memories. Opposing her is Mist, who relates deeply to her divine heritage. She fights for the reunion to happen.

During a routine visit to her parents' memorial at Jing Sum Temple, Hana stumbled across Rain lying unconscious in the back garden beneath a mural of the Eight Immortals. For some reason, Hana felt compelled to help. She brought Rain home and nursed her back to health.

A week later, Rain regained consciousness but could remember nothing of her past. Hana offered Rain shelter until she could be on her own again. Within a short time, Hana noticed the exceptional intelligence that Rain possessed. It became clear to Hana that Rain was a genius in various technical and academic disciplines. In time, the two became partners, and more.

Hana is instructed in her new mission by Jin for a reward of 25 million: Infiltrate the Wing Chune campus tower and steal DNA. Hana needs to steal Dr. Liu's hair and fingerprints while Rain needs to do background work for the security system. They begin their mission in the aqueducts to bypass the security. They fight off security robots called Fixers. While Hana and Rain explore separately, Hana finds a scared man who claims another man is going crazy and is trying to kill everyone. Unfortunately, Rain encounters the psychotic man, known as the Planner, and is abducted and hooked up to a strange sexual-looking torture device. Hana defeats the Planner and saves Rain.

At the party, Hana manages to successfully take the hair, while Rain is able to get past the security system. The women meet up in an elevator and perform a lesbian act together in order to distract the guards watching them via the cameras. Rain disguises herself in a yellow outfit among Bio-Enforcers. Hana manages to swipe the DNA, but she is discovered. Rain creates a diversion by causing a biohazard alert at the party. Rain also manages to take a deadly virus in a canister with her.

After the mission, Jin orders Hana to go another mission in Xi'an, although she has to go alone as part of the deal. Despite this, Rain worries for Hana and suspects the whole thing is a trap, and goes to Xi'an after her. Rain ends up saving Hana from Deke. Another zombie attack occurs and Hana separates from Rain. Rain passes by an unconscious Deke, although he springs up and takes her hostage. Hana arrives and Rain tells Hana they are after the "Dark Cipher" before her mouth is closed by Deke. Deke tells Hana he will free Rain once she obtains the blood sample from Glas and that he will be waiting in the lower tomb.

Hana learns from Qin Zheng that Rain has returned home to Penglai Shan and he will only allow her to reach Rain if she passes challenges. Hana, Deke and Glas join sides and make it to Penglai Shan. After completing their challenges, Glas enters a white realm and a woman claiming to be Rain appears. However, Deke appears with another woman resembling Rain and he claims the woman beside him has cured his EINDS. Hana arrives and is confronted by the two "Rains" and must determine who is Rain and who is Mist.

In the canon ending, Hana shoots the real Mist. Hana tries to to finish her off, but Rain implores Hana not to, saying Mist is still her sister. Mist reveals Rachel is in the same room as them and proceeds to inject herself with the Dark Cipher. Mist becomes one with Rachel and transforms into a hideous baby-like monster. Rain fights the monster alone and injects Mist/Rachel with the DNA virus. Rain tears up a bit, knowing she killed her sister and mother, and leaves with the group. A news report mentions EINDS has been cured. Elsewhere, Rain says Hana could've used the cure to free herself from the Triad but Hana says she found another gig. Rain gives Hana her knife to use for her next mission.

Note: Due to being a cancelled game, Inferno may not be viewed as canon. While only some story elements were revealed before its cancellation, much of the game's story can be pieced together.

A few years proceeding the events of the first game, Hana finally earns enough cash to purchase her contract back from the Triads. However, the Triad boss, Minkz, refuses her offer, threatening to murder Rain if she follows through on any notions of insurrection. Unable to remain attached to the dastardly gang, and too in love with Rain to betray her, Hana feels that her only means of escape is to take out Minkz. With her earnings, Hana employs her colleagues, Rain, Glas and Deke. Together, they work within the Triad complex to help Hana in her stealthy effort to eliminate the crime boss with one final shot.

Rain would be in contact with Deke, who is working on a separate mission. Rain seems to be wearing a cheongsam, likely trying to seduce Minkz as one of his girls. Rain enters a dog kennel and finds a guard who warns her she shouldn't be here; Rain says, "Why don't you show me what you do to naughty dogs that don't behave?" before kicking him to the floor. The mission goes horribly wrong when Hana gets detained. Rain gets detained as well; Minkz ominously tells her that she can join him and Hana for a private party. In another room, Rain watches as Minkz shoots Hana with a handgun to her back while she is strapped in a chair, presumably killing her. Rain manages to escape, likely with the help of Glas.

At Rain's apartment, Glas visits. Rain mentions how she misses Hana, expecting her to come through the door as usual. Rain is also angry at Hana for her choice to go after Minkz, knowing how dangerous they were. They drink wine and get intimate, with Rain being consoled about Hana's demise. In grief, Rain would also punch a mirror in anger. Rain is seen wearing a new outfit. Glas and Rain seem to head to the old Chinese province Shanxi; an image shows them in a car. Rain also appears to Hana during her elevator hallucination as one of the people in the fleshy wall.

Rain still follows Hana closely and the two have become girlfriends. She hasn't learned a great deal about herself in the past four years, and although she doesn’t speak much about this, even to Hana, she's feeling more and more uncomfortable about her own situation. In 2064, Rain and Hana are living in an apartment in Hong Kong.

Hana and Rain begin an operation in Hong Kong. When they return home, they find a strange man who has broken into their apartment. Claiming to be part of the Triad, he tasks her with completing a mission in Paris: steal a statue from the Chinese ambassador in France and kill him. Hana decides to go for it; she sees it as an opportunity to learn more about her birthplace. The two contact Deke who agrees to join in. In Paris, Rain's duty is to disable the security system. At the end of the mission, Rain flees with Hana and Axel Chevalier to Deke's rotoship.

In Greenland, Hana spots Glas, causing a group reunion and a discussion on their next mission. They decide to check out a lead at a weather station called Amethyst where they find evidence such as human remains. Glas gets separated due to an accident. They infiltrate a sea carrier searching for Glas and more evidence; Hana and Axel go together while Deke and Rain pair up. Deke and Rain find Glas, but Rain gets killed by a monster.

Later, Hana winds up in a Hell resembling Hong Kong with an evil zombie-like Rain following Hana. Hana musters the courage to leave "Rain" and follows Glas outside her Hell. During the final confrontation, "Rain" suddenly appears and Sedna says she can truly bring back Rain to normal for Hana, although Glas and Deke try to convince Hana that it's not really Rain, instigating a stand-off between Hana and Glas. 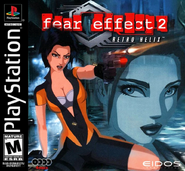 Rain on the cover

Rain in the Wing Chune aqueducts

Hana and Rain begin their mission

Rain in the aqueducts

The mercenaries in Hell

Rain being embraced by Hana

"Why don't you show me what you do to naughty dogs that don't behave?"

Rain being comforted by Glas after Hana's apparent death 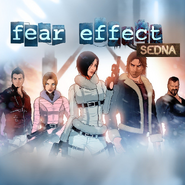 Rain with the group