Edit
watch 01:36
We're Getting Mutants in the MCU - The Loop
Do you like this video?
Play Sound

Students are non-hostile NPCs in Fear Effect 2: Retro Helix. They work inside the Aqueducts under Wing Chune Tower. Students have been traumatized and will only attack if they are attacked first.

The students are hired to do maintenance in the Aqueducts. Due to the Planner going crazy and murdering many of them, along with Fixers suddenly shooting the Students on site, the Students have been traumatized to the point of cowering in corners and running at the first sign of trouble. They will never attack unless provoked first, at which point they'll take out a pistol and start firing. They can easily be sneaked up on and killed with a single shot. Some will drop valuable ammunition, which can be put to good use against stronger enemies later.

They can be ignored entirely. If the choice is made to kill them, try to get behind one for a one-hit kill. If that's not possible, use Melee while crouching to kill them without using ammo. 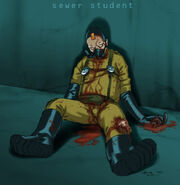 concept art of a dead student 1

concept art of a dead student 2

concept art of a dead student 3
Community content is available under CC-BY-SA unless otherwise noted.
Advertisement